Nathaniel Woodhull & WFHS Students Spend "A Day in the Life" of the Carmans and Forge Rivers
Nov 5 2021 9:45 AM

William Floyd High School and Nathaniel Woodhull Elementary School students recently participated in “A Day in the Life” program focused on the Carmans and Forge rivers, a fun and hands-on scientific exploration event featuring students exploring and collecting information about each estuary and learning how it all fits into the larger ecosystems.

Students examined the physical and chemical aspects of the river, conducted biodiversity inventory of the flora and fauna and assisted in collecting scientific data, as well as reviewed work that is currently underway to restore various migratory fish species to their historic seasonal spawning environments.

In September, William Floyd High School science educator Dawna Cintron took a group of students to the Smith Point Marina and explored the bay and beach - taking water samples via a Bay Constable boat, as well as on the shoreline. While at the same time, fourth-grade students from Mr. Murphy’s, Mrs. Cook’s, Mrs. Stern’s, Ms. Shiralli's and Ms. Nocella’s classes at Nathaniel Woodhull Elementary School had the opportunity to get an up-close view of some of the river’s creatures collected by seining nets at the Wertheim National Wildlife Refuge.

Then in October, William Floyd High School students in Ms. Swiss’s, Mrs. Hart’s and Mr. Orlando’s science classes visited the Riviera docks and Osprey Point shoreline in Mastic and Mastic Beach, respectively, to collect data and conduct research of the Forge River. The field trip was divided into four stations with station one having students collecting data regarding the weather and tides of the rivers; station two was focused on students surveying and mapping the land surrounding the rivers; station three included students collecting biological data, including seining the rivers and recording the creatures or organisms they found in the water; and station four having students collecting and examining water quality data including dissolved oxygen, nitrogen, salinity, turbidity, phosphates and pH.

Collected data was recorded and placed into a database that includes data from over the past several years. Students will be able to compare the data and study how each estuary has changed over time and see how the weather has affected them.

This fun opportunity was made possible by the Central Pine Barrens Commission, the New York State Department of Environmental Conservation and Brookhaven National Laboratory. You can read about some of their experiences in Newsday by clicking here. Please see below to see additional photos from both days and be sure to tune in to LI News Radio 103.9 at 10:30 am on Saturday morning to hear William Floyd science educators and students on “Spotlight on Long Island Schools” hosted by Robert Vecchio. 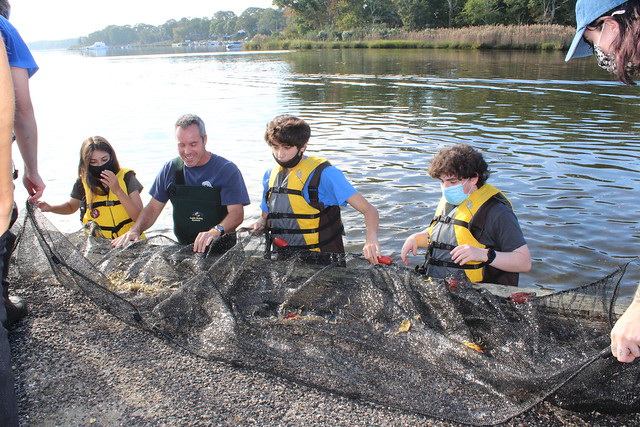