The William Floyd High School girls’ varsity tennis team is in the midst of another historic season. Under the leadership of head coach Dave Pia, a 10-time Suffolk County League Coach of the Year who is expected to be in the running for yet another nomination, the Colonials have been perfect so far this season, winning their first 11 matches overall including a 9-0 record in league play. This will be the 18th consecutive season the Colonials have qualified for the playoffs (the tennis postseason was canceled last year due to the pandemic or it would be 19 consecutive years).

With several matches left in the regular season, the Colonials are hoping to finish strong and then start preparing for the individual tournaments and team playoffs.

The hard work and commitment to being great on the tennis court has established William Floyd’s doubles pairs as among the best in the county. All three doubles teams are currently undefeated this season, led by All-County players Amanda Jones, Hailey O’Connor and Isabella Saladin. Coach Pia describes them as being “coaches on the court” who are paired with their talented partners Jacky Sutherland, Casey Musselman and seventh-grader Gianna Martin, respectively. Ariella Morano, Cavelle Simpson and Alyssa Dingman round out the talented doubles line-up for the Colonials.

“The players know they must stay mentally focused and play up to their ability if we are to continue with our success,” said Coach Pia. “There is no secret behind the success of our tennis program - practice, practice, practice,” Coach Pia added. “I am so proud of the dedication and work ethic from all of our players in the program. Much is demanded of them…when you’re successful at something, more is demanded of you, not less.”

Please see the album below for some additional photos and good luck to the Colonials the rest of the way! 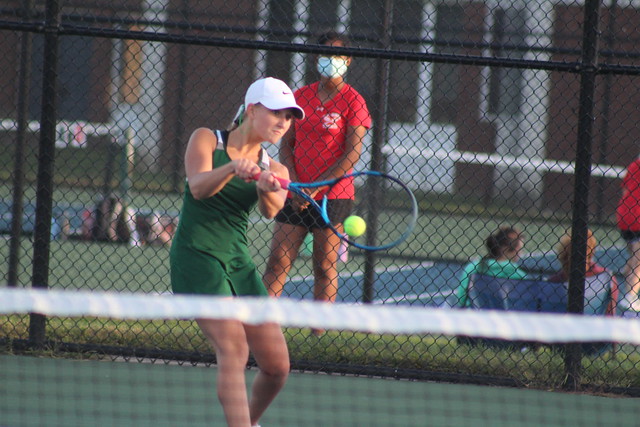