It has been a long time coming for the William Floyd High School girls’ varsity basketball team. With not a single senior on the roster, the young Colonials are off to their best start to a season since 2012-13 - the last time William Floyd made the playoffs - and are dominating on the court with a starting lineup that features three sophomores and making a statement to the rest of League I that they are back and prepared to make a run at returning to the playoffs.

Through 11 games the Colonials are 8-3 overall (3-2 in League I) and are receiving major contributions from underclassmen, including sophomore’s Kayla Gilmore and Jacky Sutherland. Both players are averaging high double-digit points per game, (Kayla 17 and Jacky 15.5) and are the only teammates in Suffolk County that are in the top 25 of average points per game this season. Sutherland leads the team in three pointers, and, Kayla became the first Colonial ever to record a quadruple-double earlier this season, recording  24 points, 11 rebounds, 10 assists and 11 steals against Riverhead. She also leads the team in assists with an average of 3.6 per game.

According to head coach Rich Sinclair, junior Gabby Hanlon has also played very well for the Colonials averaging seven points per game and is the team’s leading rebounder at eight per game. Junior Keyaisia Brewster is second on the team in assists at 3.5 per game and is second on the team in three-pointers (Jacky Sutherland). Sophomore Kayden Meyer rounds out the starting lineup and has played big minutes and been an outstanding defensive player for the Colonials. “Juniors Alyvia Verga and Payton LaVallee and eighth-grader Natalie Samlihan have provided big minutes and made key plays for us off the bench,” Coach Sinclair added.

Still a very young team, these Colonials have been crafting their skills together for many years. Gilmore, Sutherland and Brewster have been playing on an AAU (Amateur Athletic Union) team together since they were fourth graders. All have been playing big minutes for the varsity team since they were in middle school. “The girls play basketball throughout the offseason together at open gyms with our coaching staff and have participated in the Town of Brookhaven girls’ basketball summer league since they were called up to the varsity,” said Coach Sinclair.

As for his goals and expectations for the rest of the season, Coach Sinclair would love to see his team qualify for a playoff spot in the toughest public school girls’ basketball league on Long Island and win a first-round game. “The furthest a girls basketball team has gone since playing in the current playoff bracket system is the second round during the 2009-10 season. To match that feat would be great. Hopefully, if we make the playoffs we can advance further.”

Another goal for Coach Sinclair is to win 13 games, which would be a school record since William Floyd moved to League I. “I would like us to continue to improve on both the offensive and defensive end of the court as our schedule gets tougher by playing other League I schools.”

The team was also recently highlighted in Newsday after a come-from-behind win over Brentwood. Please see some additional photos in the album below! 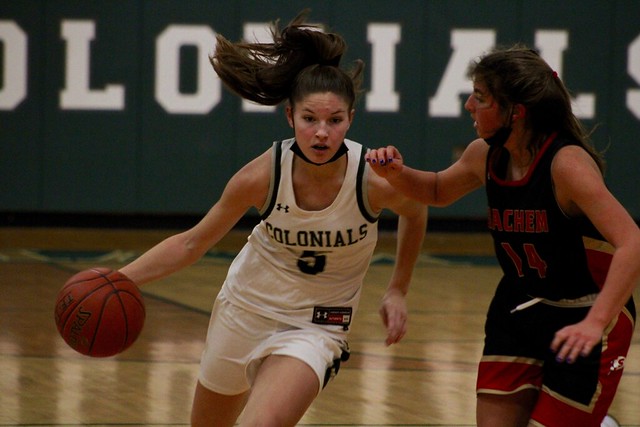